Tetяis: The Soviet Mind Game is a variant of Alexey Pajitnov's tile-matching game of the same name that was made for the NES. It was published by Atari Games under their "Tengen" label without Nintendo's approval.

Much of the gameplay mechanics and the graphical style were lifted from the arcade Tetris by Atari Games.

The game gives line clearing bonuses only after completing each 30 lines. 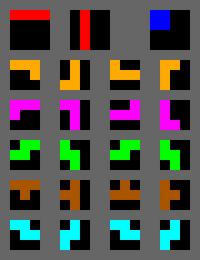 Mirrorsoft president Robert Stein approached Tetris creator Alexey Pajitnov with an offer to distribute Tetris worldwide, and secured the rights to license the title, which were in turn granted to Spectrum HoloByte. After seeing the game run on an Atari ST, programmer Ed Logg petitioned Atari Games to license it, and approached Stein.[1] With the rights secured, Atari Games produced an arcade version of Tetris,[2] and under their Tengen brand name began development to port the title to the NES.

Atari (Tengen) along with Spectrum HoloByte later licensed the rights to distribute a Japanese console version of Tetris to Henk Rogers' company Bullet Proof Software, and Rogers traveled to Moscow to secure permission to distribute Tetris with the Game Boy. Around this same time, Nintendo approached Spectrum HoloByte on the prospects of developing a version of Tetris for the Game Boy, and a representative of Mirrorsoft, Kevin Maxwell, traveled to Russia to secure permission on their behalf. However, because Stein had secured the rights from Pajitnov directly and not from the Russian authorities, the USSR's Ministry of Software and Hardware Export ("Elorg") stated that the console rights to Tetris had not actually been licensed to anyone, and that Atari Games had only been licensed the rights to produce arcade versions of Tetris.[3] They sent a fax to Maxwell in England with 48 hours to respond; Maxwell however was still in Russia at the time and received the fax late, resulting in licensing being distributed to Nintendo. In April 1989, Tengen, who had previously filed an anti-trust suit against Nintendo, sued Nintendo again claiming rights to distribute Tetris on the NES, and Nintendo counter-sued citing infringement of trademark.[4] In June 1989, a month after the release of Tengen's Tetris, U.S. District Court Judge Fern Smith issued an injunction barring Tengen from further distributing the game, and ordered that all existing copies of the game be destroyed.[5] As a result, 268,000 Tetris cartridges were recalled and destroyed.

Community content is available under CC-BY-SA unless otherwise noted.
Advertisement