Tetris Splash was released to the Xbox LIVE Arcade as a paid download. It supports up to 6 players over the Xbox LIVE system or 4 players on a single Xbox 360.

Tetris Splash broke the trend of slow DAS guideline games by setting approximately 10 DAS at 1/2G, and a line clear of approximately 12 frames. While not so fast by speed runners' standards, this move significantly changed the gameplay, allowing for much faster multiplayer. The game recognizes T-Spin: 3-corner no kick and the same combo system as TOJ[1] 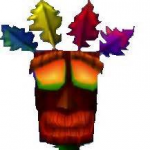