They fall, can be rotated, and used to break lines.

Tetrominos, occasionally known alternately as tetrads, blocks, Tetriminos (official name), or tetriminoes, are the blocks used in every known Tetris game. They come in seven shapes, all of which can be rotated and then dropped. Tetrominoes all have an area of four squares. In certain Tetris games, the colors of them vary.

A tetromino, is a polyomino made of four square blocks. The seven one-sided tetrominoes are I, O, T, S, Z, J, and L.

The spelling "tetromino" is standard among mathematicians.

The Tetris Company had preferred tetramino around 1999 and has used Tetrimino since 2001. TTC has trademarked the name Tetrimino and uses the initial uppercase T.

Each tetromino has a letter name and several alternative names.

In most games other than Tetris for NES, Tetris & Dr. Mario, or black-and-white systems*, each tetromino has a different color. However, before about 2001, these colors varied from product to product, making it difficult for people who play different games to discuss "the blue piece". Since then, the color schemes associated with SRS and TGM Rotation have dominated new games, and "the blue piece" is always J (see below). The diagrams below will use the guideline colors.

The Tetris Company owns the copyright and trademark on all seven tetrominoes. The idea of tetrominoes is copyrighted to them. They were patented in 1996, but it expired two decades later. Another patent application was submitted in 2012. Tetris is still patented today, and the patent will expire in 2032.

If you know any other names for a tetromino, please list them in the section corresponding to the tetromino by editing the section.

This tetromino is very useful for filling deep 1-wide wells within your stack (Diagram 1), and is the only one to be able to clear 4 lines (a Tetris) within traditional rulesets (Diagram 2).

Due to I's design as a Tetromino, it can be used for a Tetris Line Clear, because of a design of 4 Mino's (Blocks) tall.

This tetromino can be useful in filling 1-1-2-deep gaps (Diagram 1) in your stack, as well as clearing lines in a left-side 1-wide well as long as there is a 2-wide opening at the top (Diagram 2).

This tetromino can be used in the exact same ways as the J piece in mirrored situations. Note that some specific rotation systems also allow non-mirrored kicks from these tetrominos.

Regarded as an unversatile tetromino due to its lack of unique rotation states, this tetromino can be used for filling deep 2-wide wells (Diagram 1), as well as creating 2-tall steps for J- and L-pieces (Diagram 2).

This is the only tetromino where, when part of it is cleared, it is always split into dominoes.

This tetromino can be used in filling gaps in your stacks that have steps in them (Diagrams 1 and 2), as well as creating these steps for other tetrominos to utilize (Diagram 3). It can also be used for clearing lines in a right-side 1-wide well with a 2-wide opening at the top (Diagram 4).

This tetromino can be used to fill an inverse-pyramid-shaped hole in your stack (Diagram 1), as well as fixing a highly stepwise stack into a more "flat" stack (Diagram 2). It can also be used in the infamous "T-spin" (T-Spin Double shown in Diagram 3).

This tetromino can be used in the exact same ways as the S piece in mirrored situations. Note that, like the J and L pair, some specific rotation systems also allow non-mirrored kicks from these tetrominos.

*As of 2009, if hardware limitations do not allow all colors to be used, tetrominoes have distinct hues and patterns to differentiate themselves.

**Even though the t-tetromino in the Tetris logo is not split into four minoes.

In The Next Tetris, Sticky mode of Tetris Worlds and Tetris Mania, Jewelry Master, and Alizarin Tetris, some tetrominoes are multiminoes, that is, the tetromino itself is divided into visible components. Though the tetromino is moved and rotated as a unit, once it locks, the components separate by colors and fall.

In Magical Tetris Challenge, there are minoes that are 3×3, 4×4, and 5×5 squares to make the gameplay more challenging. It also has pentominoes.

In "Tetris Heaven" as concieved of by Randall Monroe in xkcd.com/888/, the "Heaven Block" is the exact size and shape required to eliminate every open row up to the highest column. In the fanmade adaption, the piece is portrayed as a single square when shown as coming next. However, be careful not to rotate it, or move it to the left or right, or else.

This article is a stub. You can help Tetris Wiki by expanding it.

In Puyo Puyo Tetris, each block has its own personification. They serve as the crew of the Starship Tetra, named Teto gou (テト号) in Japanese.[1][2]

Tee (Japanese: ティ, pronounced as Ti) is the youthful pretty boy captain of the group, resembling Puyo Puyo's Schezo and Maguro. He wields a chakram-like disc and references spinning a lot, due to his being based on the T tetromino (and the mechanic of T-spins).

O (オー, pronounced as Oo) is the ship's mascot that supervises the ship, consisting of a yellow sphere with arms and a face, sitting on a cloud, with two O-tetromino pigtails for hair, resembling Puyo Puyo's Carbuncle. He is based on the O tetromino.

Ess (Japanese: エス, pronounced as Esu) is a space Sci-Fi Southern Belle type girl, with a sharp, abusive tongue. She believes Zed to be her 'Papa', but it is really Ex (an 'extra' Tetris character based on the X pentomino) who is her biological father. She resembles Puyo Puyo's Raffine and Strawberryna, along with Rhythm Thief R's Maria, and wields a parasol as a weapon. She is based on the S tetromino.

Zed (Japanese: ゼット, pronounced as Zetto) is a big robot with a red Z-tetromino emblazoned on his front, who serves as the Starship's housekeeper and chef, and who is the adoptive father of Ess. It is based on the Z tetromino.

Jay and Elle (Japanese: ジェイ&エル, pronounced as Jei & Eru) are a set of twins who delight in causing mischief, much to the chagrin of Ai. They are treated as a single character gameplay-wise, and are based on the J and L tetrominoes, respectively- with Elle being the only Starship Tetra crew member whose color scheme is not based on the tetromino she's based on, as the L tetromino is generally orange, while Elle herself is a combination of pink and brownish-red.

Ai (Japanese: アイ, pronounced as Ai) is the chief engineer of the Starship Tetra, a tall anthropomorphic dog who is normally a knowledgeable gentleman, but breaks into frightened whimpers at the drop of a hat. He resembles Puyo Puyo's Risukuma, and wields a plumb bob as a weapon. He is based on the I tetromino.

There is also the X pentomino, which is named Ex. He is the Keeper of Dimensions. 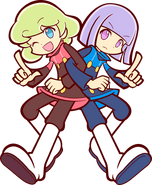 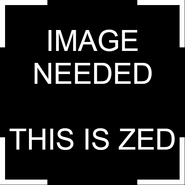 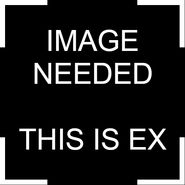